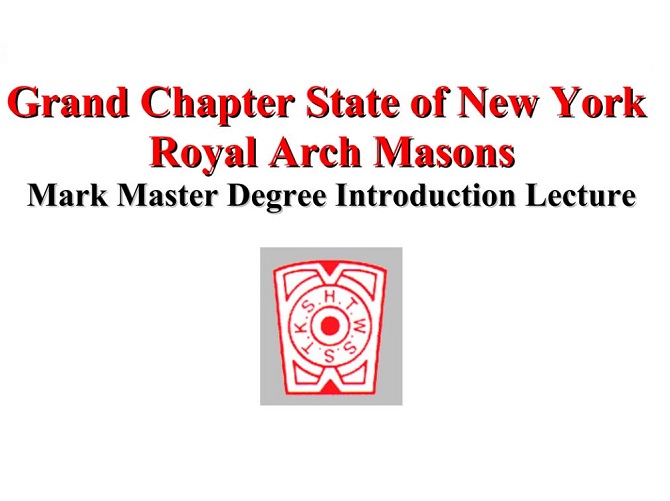 The Degree of Mark Master Mason which you will receive tonight is a most important one,
so much so that England and some other countries confine it to the Jurisdictions of a separate Grand
Body. In America, however, we give it to you as the introductory degree of the Capitular Rite.
You will recall that at the building of King Solomon’s Temple, there were 3300 Masters or
Overseers of the Work. In this degree the setting reverts to the quarries where skilled Fellow crafts
present their work for approval of the Overseers so that each stone may fit with that exact nicety
previously described.
Each Fellow craft was required to select for himself a distinctive mark. This mark chiseled
on each stone was as complete identification as the written signature of today. A mark was held by
the possessor in the same honor as his good name. It was frequently handed down from father to
son and was in practical use in the building of Cathedrals and public buildings down to the Feudal
Ages in Europe. You will learn this evening it was also an acceptable pledge of credit in
emergency. This mark, with a copy displayed when receiving wages, contributed much to that
freedom from discord and confusion which prevailed among the workmen at the Temple.
The wages of a Fellow craft were Corn, Wine, and Oil, as preferred, but history records the
wages were mostly grain. The term “Penny a Day” used in this degree refers to a stated wage and
in no way associated with the small coin known today.
In previous degrees you were in darkness and were directed by a guide. Here you are at
work in the open quarries, and after due instruction, you proceed alone with your specimen of work
to the Overseers. You then call for your wages the same as the other workmen. You become
skilled in forming a perfect ashlar used in wall construction. But, what of the stones that form the
arch which you have not been taught as yet to frame? This lesson you will meet tonight, bearing in
mind that the Temple you are building, is your own Temple. The Temple of your present life, in
which every stone is a good act or constructive deed and each bearing the mark of your own good
name.