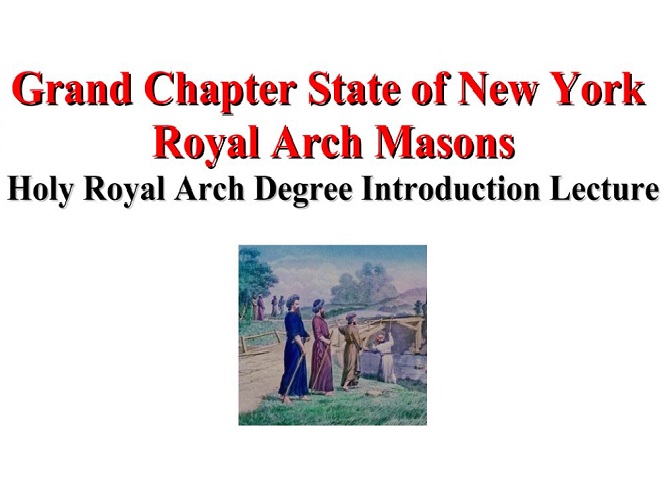 On this occasion we have the pleasure of conferring, and you have the privilege of receiving
the crowning Degree of Masonry, that of the Holy Royal Arch. This degree is founded upon the
building of the Second Temple, which was by no means a rebuilding of the renowned Temple of
Solomon.
History records that the Temple of Solomon stood for 420 years when Nebuzaradan, Captain
of the Guard of Nebuchadnezzar, King of the Chaldeans, destroyed it. The Second Temple erected
by Zerubbabel stood for nearly 500 years when it was taken down by Herod and replaced by a third.
The Temple of Herod, after standing about 100 years, was destroyed by the Romans under Titus.
The Mosque of Omar now occupying the same site has stood for about 1200 years.
With all these changes of possession, the ravages of war, time, and the elements of thirty
centuries, the foundations built by Solomon remain unmoved. Those massive stones so durably laid
are still in place. Each said to still bear the “mark” of the quarry men.
King David was by heritage in possession of the Sacred Ark of the Covenant and Tables of
Moses called the Book of the Law, which for safety he kept under strong guard at the King’s house.
In his instructions to Solomon, he desired that a secret apartment be built in the Temple as an
invulnerable protection to the Ark.
In the Royal Arch Degree you will meet characters and conditions at the time of the
destruction of the first Temple, when the people of Jerusalem, were taken by thousands as captives
to Babylon. You will witness the return of some of those captives to Babylon. You will witness the
return of some of those captives over a long sojourn to help rebuild the Temple under the direction
of Zerubbabel.
As you go along as a Sojourner in this degree, may we urge your closest attention to its
significant symbols. In the character of workmen you will discover these sacred articles among the
ruins together with an accompanying discovery, with which you will be vested with gratifying
satisfaction; “The Long Lost Masters Word.”