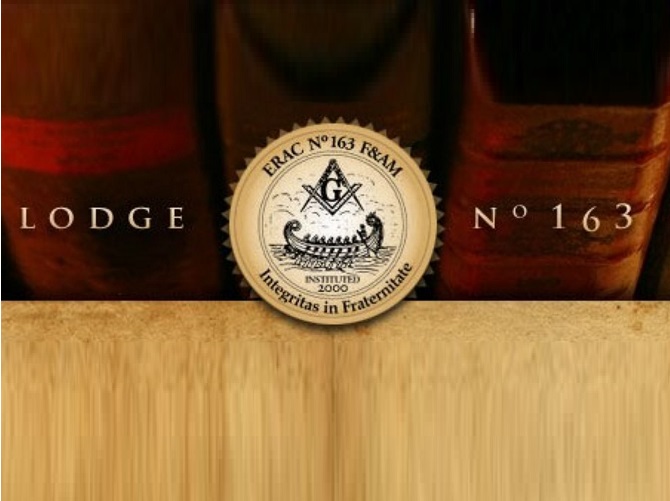 In May of 2000 the Grand Lodge of New York, F&AM, approved the merger of Towpath Lodge No.163 and ERAC Lodge No. 943 and issued a charter creating ERAC Lodge No. 163. The Lodge meets on the second and fourth Mondays, except during July and August, at the East Rochester Masonic Temple, 152 West Commercial Street in East Rochester.

Rather than naming the new Lodge ‘East Rochester’s Ancient Craft – Towpath Lodge’, the architects of the consolidation decided on ERAC , an acronym derived from the first letters of the old lodge name.

ERAC Lodge, through the work of the dedicated Masons gained from the various mergers and from the younger members that have joined, has become one of the most active Lodges in New York State.

The roots of this Lodge can be traced back to 1850 when Yonnondio Lodge 163 was organized in Rochester, New York. In all, five Lodges created in the 1800’s and early 1900’s form the backbone of ERAC. A brief history of these Lodges follows.

YONNONDIO #163
In 1850 a group of members of Valley Lodge #109 decided to create a second Lodge in Rochester. Having secured the permission of Valley Lodge in April of that year, they elected the charter officers and then drafted a petition to Grand Lodge for dispensation to organize a Lodge in Rochester. The name of this Lodge was to be Yonnondio which is of Indian origin and means “Great Mountain”. This name was suggested by Brother Ely Parker, a member of Valley Lodge, a full-blooded Indian and a Chief of the Six Nations.

The Lodge was formally organized at meeting held April 17, 1850 in the Burns Block on the corner of East Main and State Streets where the Crossroads Office Building now stands. Yonnondio Lodge was instituted and received its charter on June 21, 1850.

At first the regular meeting nights were on alternate Wednesday evenings at 6:30 o’clock from November through April, and on the Wednesday evening of or next preceding full moon at 7 o’clock for the remainder of the year. In 1856 the meeting nights were changed to alternate Tuesdays. In 1858 the Lodge moved to the Chappell Block where the Wilder Building is now located. A fire in 1869 destroyed the meeting rooms and many of the Lodge records. The Lodge moved to the Masonic Hall in the Smith Perkins Block at 15 Exchange Street. Later it moved to the Masonic Temple on Clinton Avenue North. When the new Masonic Temple was built at 875 East Main Street the Lodge relocated there.

Later Yonnondio Lodge consolidated with Genesee Falls No. 507 and Zetland Lodge No. 951 to form Towpath Lodge No. 163.

GENESEE FALLS No. 507
A meeting was held on August 14, 1860 at the Masonic Hall in the Chappell Block for the purpose of organizing a new Lodge to be known as Genesee Falls. The Lodge received its charter on June 26, 1861 and was constituted as Genesee Falls Lodge No. 507. The first Master was General William E. Lathrop who was a charter member of Valley Lodge, first Senior Warden of Yonnondio and later Master of Yonnondio Lodge.

When a fire destroyed the Lodge rooms, Genesee Falls Lodge met in the rooms of Rochester Lodge 660. They were located in the Union and Advertiser Building on West Main Street which later became the Powers Hotel. In 1872 Genesee Falls moved to the Masonic Hall in the Smith Perkins Block. They moved to new Masonic Temple on North Clinton Avenue in 1903. When the new Masonic Temple was built on East Main Street the Lodge relocated there. The gavel used at the cornerstone laying of the new Temple in 1928 was the property of Genesee Falls Lodge.

So many of the members worked in the Post Office in 1888 that the Lodge was known as the Post Office Lodge. Lambskins were presented to candidates for the first time in 1888 making Genesee Falls the first Lodge in Monroe County to do so.

The most outstanding event in the history of Genesee Falls occurred in October 1893 when fifty members traveled by private railroad car to Brooklyn. There in Bedford Lodge 574 they dramatized the Third Degree in costume before the Grand Lodge officers and 800 brethren.

For many years the Lodge held an Annual Communion Breakfast. Another annual event was the Sunrise Breakfast in Genesee Valley Park.

ANCIENT CRAFT No. 943
On Saturday, April 22, 1916, a group of Masons comprised of members of Yonnondio Lodge 163, Seneca Lodge 920, and others, met in Composite Hall in the old Masonic Temple on Clinton Avenue North for the purpose of organizing a new Masonic Lodge.

The meeting was called to order by Wor. Bro. Ansel E. Beckwith, Master of Seneca Lodge 920, and president of the Ruling Masters Association, who was acting as temporary chairman.

After a lengthy discussion the name “Ancient Craft” was decided upon. It was suggested by Bro. Edward H. Keith, a member of Seneca Lodge. The Lodge Seal portrayed an ancient vessel powered by oarsmen. With modifications to reflect the new Lodge name, it remains the Lodge seal of ERAC Lodge No. 163.

The Lodge originally met on Saturday evenings because a majority of the members were traveling salesmen and were away most weekdays. Later, in October of 1928, as more of the members came from local industries such as Kodak, Taylor Instruments, etc., the meeting night was changed to the second and fourth Wednesdays of the month except during July and August.

When war was declared in 1917, many of the members answered the call to arms. The Lodge presented a watch suitably inscribed to each member that enlisted. A total of 31 members and 5 sons were serving in the armed forces as of June 1918.

Wor. Bros. Shindel G. Case and W. Roy Wolf were instrumental in establishing the local chapter of DeMolay in 1923 and served as sponsors. The Lodge presented the Chapter with its Altar Bible.

ZETLAND No. 951
Zetland Lodge No. 951 received its charter on May 23, 1918. Brother Esten A. Fletcher was the charter Master. The Lodge first met in the Masonic Temple on North Clinton Avenue and later moved to the new Masonic Temple on East Main Street.

The Lodge celebrated its 25th Anniversary in 1943. Grand Master William F. Strang was the principal speaker.

Right Wor. R. Kenneth Crawford, a Past Master of Zetland Lodge, served as Senior Grand Warden of the Grand Lodge of New York from 1976 to 1978. His son, Wor. Brother David Crawford, served as Master in 1978.

EAST ROCHESTER No. 1020
A group of Masons living in East Rochester, under the leadership of Harrison C. Potter, held preliminary meetings for the purpose of organizing a Lodge in that community. They secured the consent of Fairport 476 and Northfield 426, but before they received the consent of Penfield Union 154 they had to hold field days to raise money to pay off the mortgage on the Penfield Masonic building. They received dispensation from Grand Master Arthur S. Tompkins on December 20, 1922. The Lodge was granted a charter on June 8, 1923.