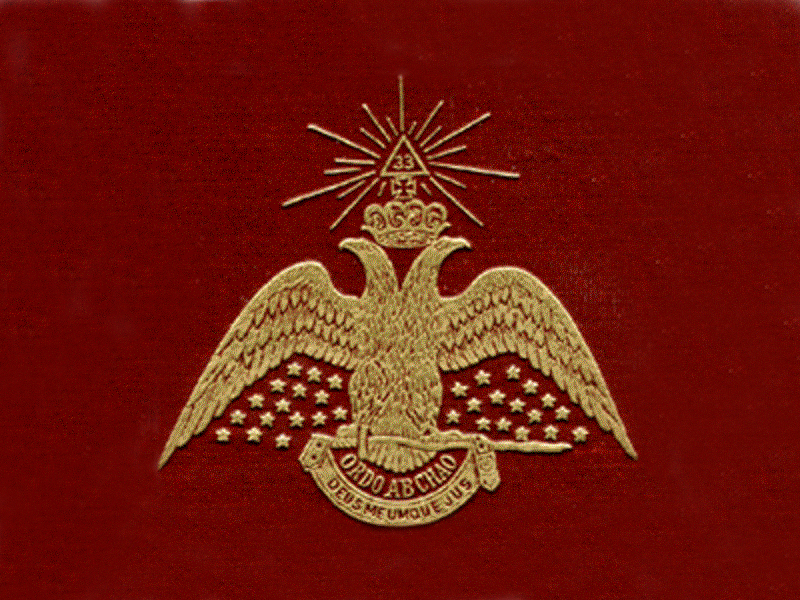 The goal of the Jewish Masonic elite is to establish dictatorial Illuministic Communism and to enslave all of mankind under the thumb of a Jewish master race led by a world messiah who is to rule from Jerusalem.

An essential element in this grandiose plan is the Masonic plot to blow up and destroy Islam’s golden-domed monument now sitting on the Temple Mount in Jerusalem, despised by Orthodox Jewish rabbis and the secularist Masonic Illuminists alike.

On the heap of its ruins, the Masons intend to build a Jewish Masonic temple where they and their satanically energized messiah shall worship and pay homage to the Egyptian double-headed eagle deity, Mammon-Ra, the god of money and prosperity (Daniel 11:37-39).

The Jews are beset with an unbridled ambition—a consuming desire to acquire global power and establish once and for all their long-delayed Zionist Kingdom on planet earth.

One of the unheralded and least known facts about Freemasonry and the Masonic Lodge is its Jewish origins and nature. The religion of Judaism, based on the Babylonian Talmud, and the Jewish Cabala (or, Kabala), an alchemical system of magic and deviltry, form the basis for the Scottish Rite’s 33 ritual degree ceremonies.

Thus, The Jewish Tribune of New York, on October 28, 1927, stated; “Masonry is based on Judaism. Eliminate the teachings of Judaism from the Masonic Ritual and what is left?”

The well known rabbi, Isaac Wise, was emphatic when he concluded: “Freemasonry is a Jewish establishment, whose history, grades, official appointments, passwords, and explanations are Jewish from beginning to end.”

In the classic treatise of the Masons, Morals and Dogma, authored by the late Sovereign Grand Commander of the Scottish Rite, Albert Pike, we discover the revelation that the Jewish cabala is the very basis of Masonic practice and ritual and that the cabalistic “Theology of the Sephiroth” is at the root of all Masonic knowledge. This, admits Pike, is “high magic,” the “Sacerdotal Art,” and the “Royal Art.”

The Jewish cabalistic nature of Masonry is demonstrated by the Lodge’s odd view of evil. Pike writes: “The true name of Satan, the Kabalists say, is that of Yahweh reversed; for Satan is not a black god, but the negation of God…For the Initiates, this is not a Person, but a Force, created for good, but which may serve for evil. It is the instrument of Liberty and Free Will.”

As for Lucifer, the alternate name for the Devil, the former Sovereign Grand Commander frankly admits that he, Lucifer, is a good angel, and a divine god worthy of our esteemed worship. “Doubt it not!,” Pike commands.

Intimating that the antichrist, the one whom the Bible warns shall have the unholy, combined triple number 666, is the one whom the Masons (Jews) await and shall recognize as their Messiah, Pike cryptically refers to the “Triple Secret of the Great Work.”

Of course, he adds, “Masonry…conceals its secrets from all except the Adepts and Sages, and uses false explanations and misinterpretations of its symbols to mislead.”

Having studied the dark recesses of occultism and satanism for nearly two decades and having produced and authored dozens of books and videos on this foul subject, I can assure you that Masonry, which, as Pike, Wise, and others assure us, is nothing more than pure Jewish cabalism, is rife with sorcery and witchcraft.

It is of great interest that in the book of Revelation, chapter 18, verse 23, we are told that the bloody and wicked, last days “Great City,” Mystery Babylon (Jerusalem!—see Revelation 11:8), shall constitute a vast Empire of Evil that is to compass the whole earth. Its octopus-like tentacles spread via its control of money, banking, and commerce. Its rich men are secretly also sorcerers who merchandise both products and the souls of men: “…for your merchants were the great men of the earth; for by your sorceries were all the nations deceived.”

When we survey the traditions of the Masonic sect, we see sorcery and witchcraft in abundance. We view their unmitigated worship of Mammon, their god. We also see how the Masonic Lodge is pleased to welcome in its ranks not only Jews but Gentiles, even apostate Moslems, Buddhists, and men of every religion…and no religion. Yet, Jews remain “first among equals,” to use George Orwell’s phrase from Animal Farm. They are the “Princes of Masonry” (Morals & Dogma, p. 819).

In The Jerusalem Post (November 1994) was an advertisement placed by “The Grand Lodge of the State of Israel.” The display ad was addressed “To the Masons of Peace,” and listed: “The Honorable Yitzak Rabin, Prime Minister of Israel,” “His Majesty, King Hussein of Jordan,” and “The Honorable Bill Clinton, President of the United States.”

The ad closed with these fascinating words: “With warm fraternal congratulations on the signing of the peace agreement between Israel and Jordan.” Signed—Ephraim Fuchs, President of the Israel Order of Masons.”

In his remarks graveside at the funeral service in Israel for the assassinated Israeli Prime Minister Rabin, President Bill Clinton, wearing a Jewish yarmulke, a skull cap, referred to the slain Rabin as “Our elder brother.” Of course, he was referring to the Brotherhood of the Lodge.

King Hussein, a Moslem, was also present to honor his fallen Masonic elder brother. Later, shortly after the death of this same Jordanian King Hussein, Israeli Prime Minister Ehud Barak traveled to Amman, Jordan, where he met with Hussein’s successor, King Abdullah II. An Associated Press photo of Barak and the King clearly shows a Masonic handshake being exchanged.

Masons: Masters of Israel and the World

The rise of Masons to political power in Israel dates back to 1948 and to Israel’s founding as a modern-day nation. David Ben-Gurion, its first Prime Minister, was both a Mason and an avowed Marxist-Leninist and Communist. Since that time, every single Prime Minister has been a high-level Mason, including Golda Meier, who was a member of the women’s organization, the Co-Masons.

In 1993 in Jerusalem, a celebration of political Masons was held. According to the respected Italian newspaper La Republica (October 1993), in an article entitled, “Israel: There is a Pact Between Politicians and Masons,” the ceremony was attended by the Mayor of Jerusalem, Teddy Kollek, as well as by the Ashkenazi Chief Rabbi, Israel Meier Lau. Kollek told the gathered Masons, “You do a great honor to Jerusalem. This is natural, considering that King Soloman was the great builder of the temple, which is at the roots of the Masonic idea, and that his workmen were the first Masons.”

At that same ceremony, sponsored by the “Grand Lodge of the State of Israel,” Rabbi Lau stated that, “The principles of Freemasonry are all contained in the Book of Books of the Jewish people.”

It is presumed that Rabbi Lau was referring to the pornographic and racist Jewish (Babylonian) Talmud, which is, in fact, their chief law book and guide for living. I have a picture of this same Chief Rabbi, Meier Lau, giving a cabalistic Masonic hand signal to Egyptian President Hosni Mubarak, at a meeting in Cairo, Egypt, in 1998.

Former Prime Minister Benjamin Netanyahu has publicly stated (see the Israeli publication Shishi, Spring 1994) that he was initiated into the Masonic Lodge while in the United States. The La Republica newspaper stated that Prime Minister Yitzak Rabin was active in Masonry and estimated there are 4,000 Israeli Freemasons, divided into 76 lodges. Most Israeli judges and religious figures are Masons. Rothschild-supported Hebrew University in Israel has erected an Egyptian obelisk, symbol of Freemasonry, in its courtyard, and inside the new Israeli Supreme Court building is a law library architecturally designed in the shape of an Egyptian pyramid.

The Bnai B’rith Lodge of New York is affiliated with Israel’s lodges and so is the hate-mongering ADL and ACLU, not to mention almost every top investment magnate on Wall Street in New York. Truly, the Holy Bible is proven true in its prophecy of great “merchants” who, in the last days, deceive the world through their commercial trade and their sorcery.

The Planned Jewish “Temple of all Religions”

In my video, Masonic Lodge Over Jerusalem, I reveal the secret rituals conducted by Jewish Masons deep in a cave under the city of Jerusalem. I also expose the sordid plot of these men to utterly destroy and remove from the Temple mount both the Islamic Mosque of Omar and the Golden-domed structure known as the “Dome of the Rock.” These two Islamic religious edifices will be brought down by Israeli defense forces—by missiles, sapper bombs, laser bursts, or other means. Naturally, this atrocity will be done in the chaotic midst of an ongoing war, and the disaster will be scandalously blamed on the Arabs. It will be said that an errant Arab missile or bomb is responsible.

Then shall come a prophesied (II Thes. 2) Masonic Temple of All Religions to be built on the very spot from where the debris and ashes of the Moslem structures were bulldozed off and cleared.

Through its golden portals shall pass the New Zionist Messiah, King of Planet Earth. Before its evil altar he shall announce to all the world, via television, that their Universal Savior has finally come, a man knowledgeable of “the Holy Kabbalah, the exclusive heritage of the people of Israel” (Morals & Dogma, page 839).

The Jews to Become Christ and God Collectively

The Zionist Messiah will confide that it is God’s Chosen People, the Jews, who collectively are “Christ.” According to the Kabbala and the Zohar, the Jews created “God” in their image and, in turn, this “God” of the Jews is the reflected image of divine man (the Jews) himself, for Jews are said to be “partakers of the Divine Nature.”

This, then, is the ages-old, two-fold goal and final secret mystery of the Masons: First, through the worship of Mammon-Ra, god of forces (Daniel 11:39) and of money and riches, is to come the synthesis of all religions, superintended by a Jewish Messiah. Then will come a Jewish Utopia: World Government, of the Jews, by the Jews, and for the Jews, forever and ever. Amen.

A Resounding Surprise
But regardless of their plots and their Grand Scheme, the Lord of Hosts, our Savior Jesus Christ, true God of the Universe, has a resounding surprise in store for these Masonic criminals. The scriptures describe these evil men as “natural brute beasts made to be taken and destroyed” (II Peter 2:12). Their fate is clear. The scriptures say their plots shall utterly fail, their Empire shall be dissolved, their covenant and agreement with hell disannulled, and they “shall utterly perish in their own corruption.”

Oh, what a glorious hour that shall be when an angel from heaven cries mightily with a strong voice, saying, “Babylon the Great is fallen, is fallen and is become the habitation of devils, and the hold of every foul spirit, and a cage of every unclean and hateful bird…For in one hour so great riches is come to nought…” (Revelation 18: 2,17)