Home > Talks > About the ring with triangle and some writing inside

About the ring with triangle and some writing inside 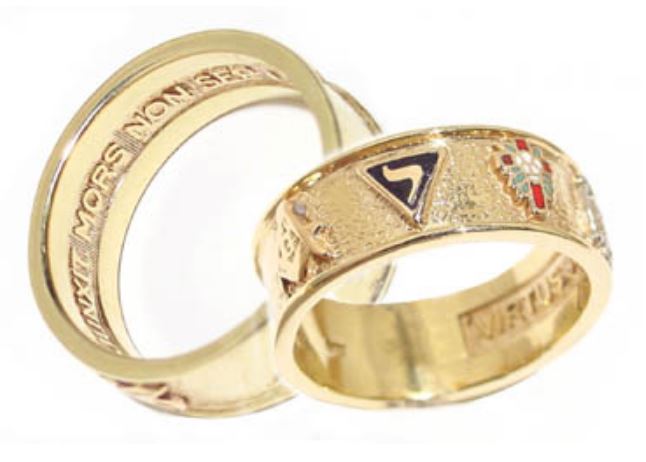 The Masonic ring with a symbol inside a triangle and some writing inside is the official ring of the Scottish Rite Mason. It is a plain band of gold, about 5/16th of an inch wide. On it is an equilateral triangle, enclosing the letter yud, the initial of the Name of Deity in Hebrew. It’s circular shape symbolizes unending commitment and loyalty just as it does in a marriage. The triangular plate and the letter signify that that commitment is to the Deity. Traditionally, the inside of the ring bears the inscription Virtus junxit mores non separabit, “Whom virtue unites, death will not separate.”

For many years in at least one Scottish Rite jurisdiction, such rings were given to each and every Mason who’d received his 14th Degree. The cost of the ring was included in the cost of receiving the degrees (also included in the ‘package’ was “Morals & Dogma” by Pike).

Below is a more fanciful ring, created commercially, that shows not only the Scottish Rite 14th degree emblem but other Masonic emblems as well and contains the inscription inside as well.